SDIG – A non-profit engagement and networking organization, committed to bring people together….

“…For Peace, Equity, & Social Justice For All“
Every: culture, ethnicity, gender, sexual orientation, global location, socio-economic status, age, ability and identity.
HOW DO WE DO IT?
Live webinars, discussions, group events, workshops, collaborations, educational programs, and more.
FOR WHOM DO WE DO IT?
Schools, Colleges, Universities, Churches, Multi-Cultural Community Groups 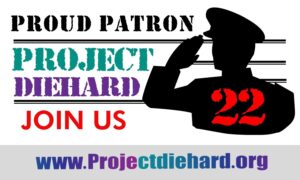 After losing more of his brothers and sisters to suicide than in multiple combat tours, Brian Gibson
founded ProjectDiehard. In 2020, 20 acres and a 10,000 square foot building were donated to the
mission to bring hope to America veterans. It is named Forward Operating Base Rush after SSGT
Courtney Rush (USAF), who lost her fight with the demons on January 03, 2012. When completed, FOB
Rush will house 12 single veterans and 2 veterans with their families for up to a year. ProjectDiehard
has built the team to bring Counseling, Therapy, Skill training, Employment and much more to their first
facility. Future plans include placing a facility like FOB Rush in every state.
With your help, Forward Operating Base Rush will be a reality and ProjectDiehard will be able to move
on to developing the next facility that creates a safe place where veterans can come and get help, the
help they need to restore HOPE. ProjectDiehard is a faith-based, scripture-lead, veteran-run Non-Profit
Organization where no leadership takes a salary. Project Diehard will be a hand up, Not a hand out.

We use cookies on our website to give you the most relevant experience by remembering your preferences and repeat visits. By clicking “Accept All”, you consent to the use of ALL the cookies. However, you may visit "Cookie Settings" to provide a controlled consent.
Cookie SettingsAccept All
Manage consent

This website uses cookies to improve your experience while you navigate through the website. Out of these, the cookies that are categorized as necessary are stored on your browser as they are essential for the working of basic functionalities of the website. We also use third-party cookies that help us analyze and understand how you use this website. These cookies will be stored in your browser only with your consent. You also have the option to opt-out of these cookies. But opting out of some of these cookies may affect your browsing experience.
Necessary Always Enabled
Necessary cookies are absolutely essential for the website to function properly. This category only includes cookies that ensures basic functionalities and security features of the website. These cookies do not store any personal information.
Non-necessary
Any cookies that may not be particularly necessary for the website to function and is used specifically to collect user personal data via analytics, ads, other embedded contents are termed as non-necessary cookies. It is mandatory to procure user consent prior to running these cookies on your website.
SAVE & ACCEPT