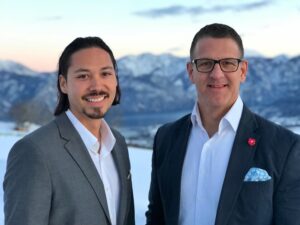 Steven Kuhn is a consultant, author, and speaker who has been hand-picked to consult with some of the most influential people in the world (rock stars, singers, actors, business leaders, and politicians) about how to expand their brand, build value, and loyalty and develop strategies for increasing beneficial relationships and achieving true Quality of Life (QOL). Steven Kuhn hails from Pennsylvania USA and served in the U.S. Army from 1986-1993 in Germany and deployed for one tour with Task Force 4-8 Cavalry as a Sergeant in Iraq during Operation Desert Storm. Upon discharge from the Army, Kuhn continued to live in Europe where he later became a best-selling author, a multi-country business turnaround leader, Political Consultant, generating over $500 Million for his clients and completed his MBA at the prestigious Bradford University School of Business Management in Leeds, U.K.

Lane grew up in Oklahoma and served in the military for twelve years from 2005-2017, most of which as a Green Beret. During his service, he deployed to Iraq twice, northern and central Africa, and worked in and traveled all over Europe. Lane is an expert at skill-acquisition and high-performance and has been entrusted to operate around the globe inhigh-riskand sensitive missions. His Green Beret experience helps to build trust and adaptability within executive teams, turning them into laser-focused and empowered “A-Teams”.

Steven and Lane now wield their talent as consultant-coaches, authors, and speakers helping leaders “amplify” their Humble Alpha to significantly improve their Quality of Life. This is all done through the consistent, conscious application of Honesty, Integrity, and transparency and Investing Relational Capital, greatly enhancing their life enterprise.